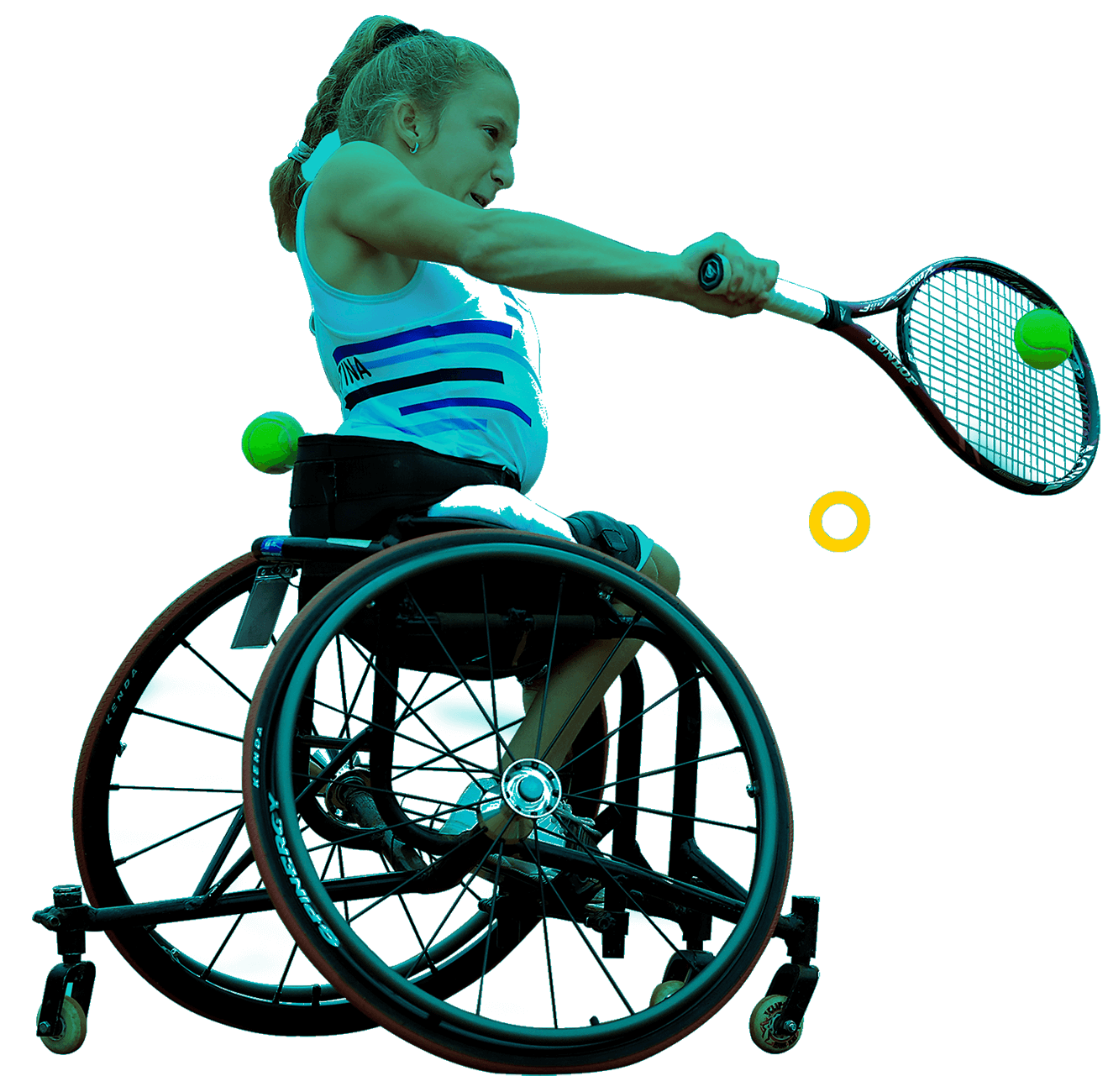 Wheelchair tennis has grown rapidly and today it is part of the four Grand Slams, the most important events in this discipline.

Para tennis players use wheelchairs specially designed for this sport.

There are 2 classes for individual and pair competitions:

Open Class is for athletes with permanent impairment of one or both legs, but with normal arm function.

And Quad Class for athletes with permanent physical impairment resulting in severe functional restrictions in one (playing arm) or both arms, and with at least three limbs affected.

Wheelchair tennis began in California in 1976 after former freestyle skier Brad Parks was paralyzed in an accident. Parks started hitting tennis balls while in rehab. Time after, he and recreational therapist Jeff Minnebraker began conceptualizing and promoting wheelchair tennis in the USA.

In 1982, France became the first country in Europe to implement an elite wheelchair tennis programme. Since then, efforts have followed that direction.

This Para sport rapidly became popular all over the world. As a consequence, wheelchair tennis was added as a demonstration sport at the 1988 Paralympic Games in Seoul.

At the Barcelona 1992 Paralympics, wheelchair tennis achieved the status it holds today. Sydney 2000 was a key event, as this discipline was included in all four tennis Grand Slams tournaments that take place annually.

In 2004, the quad category was added to the Paralympics after the great efforts of Para tennis player Rick Draney.

Regarding the Parapan American Games, this discipline was included at Buenos Aires 2003.

Argentina is the team that leads the medal count with 6 medals, 4 of which are gold.

The rules are very similar to Olympic tennis, with the difference that the ball may bounce up to two times before scoring. The first bounce must be inside the opponents’ court area.

Players must use a racquet to hit a ball which has to go over a net placed in the middle of the court. The objective is to throw the ball into an area within the court where the opponents are not able to reach and respond.

The dimensions of the court and the net in wheelchair tennis are the same as in Olympic tennis. It is also played with conventional racquets and balls. The only special equipment is the wheelchair.

As in wheelchair basketball and badminton, modern tennis wheelchairs have two larger wheels arched at the rear to optimize stability and maneuverability.

Men and women compete in an international circuit that includes the 4 Grand Slams -Australian Open, Roland Garros, Wimbledon and the US Open- as well as many other events, in addition to the quad division.

Which are the two divisions considered in wheelchair tennis?

At Santiago 2023, wheelchair tennis will be hosted at the Anita Lizana Tennis and Racquet Sports Training and Competition Center. With an investment of 18.6 million dollars and an area of 6,367 square meters, this venue -today the Central Court of the National Stadium- will receive 5,020 spectators.

This court was given the name of Anita Lizana to honor the most important woman in the history of Chilean tennis. She won the U.S. Championships singles title in 1937, and was the first Latin American person to be ranked World Number 1 tennis player. Lizana will inspire all athletes and Para athletes who will compete in this new venue.