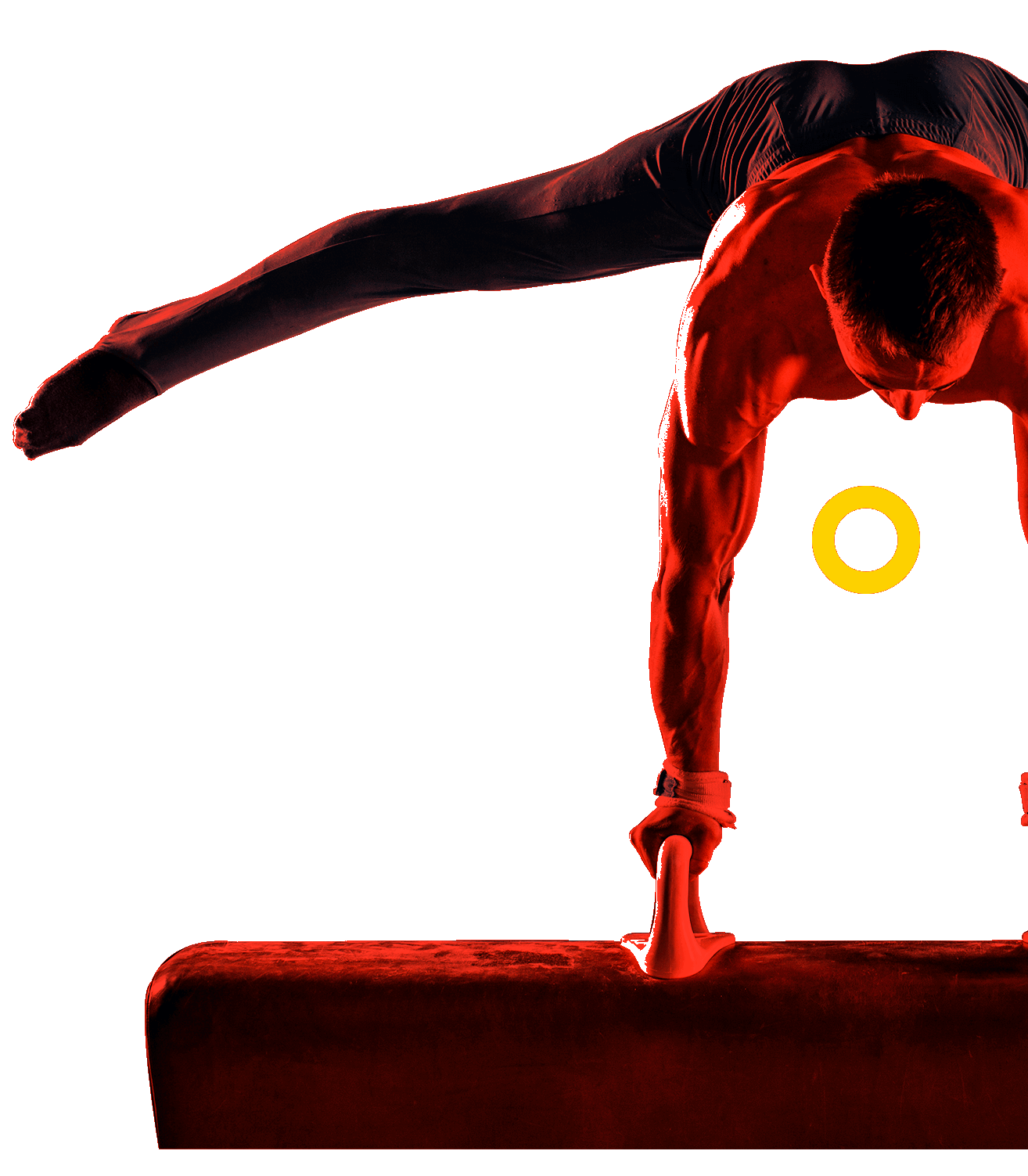 Gymnastics Men’s artistic gymnastics combines speed, strength, power, flexibility with artistic and acrobatic skills, everything performed emphasizing the technique. It is a gymnastics specialty practiced with six devices, such as the pommel horse, rings or floor exercise.

Men’s competition offers a great exhibition of strength, where gymnasts defy gravity and overcome the physical limits in six different events depending on the devices to be used: vault, floor exercise, horizontal bar, parallel bars, rings and pommel horse.

Gymnastics was born in ancient Greece, where physical ability was a prized attribute, and body development was the goal to achieve through athletics in its purest form: running and jumping. The ancient romans also practiced gymnastics, but with the objective to physically prepare their soldiers to be invincible in battle.

The term “artistic gymnastics” arose in the beginning of the 19th century, to separate the light styles from the techniques used in military training. This discipline was first introduced in Athens 1986 Olympic Games, but it was practiced by men only, and was included in the first edition of the Pan American Games, held in Buenos Aires 1951.

In the men’s Pan American medal count the participation of Cuba and United States are highlighted, with 62 and 57 gold medals, respectively.

This contest determines the champion by teams and the qualification for the individual general finals, and finals per device (four competition phases).

The Qualification, from which gymnasts go to the different finals may be: Individual General Finals, known as All Around, which is the sum of the scored obtained in the six devices; Team Finals; Finals per Device where the 8 best qualified gymnasts participate in each device.

This mode consists in vaulting over a platform boosted by a trampoline. Each gymnast has two jump attempts and may jump with one or two feet. The legs must go over the head rapidly and with such strength that it allows to gain high and distance, and the athlete must land both feet on the ground at the same time.
This device made with a 2.8 meter-long bar. The routine consists in pulse movements. The gymnast must perform spinning movement, including jumps, somersaults, stunts and pirouettes. One of the main characteristics of this device it how fluid the routine is performed. One movement has to be linked to the next without stopping and maintaining the continuity and direction of the initial movement. To this end, any interruption or non-justified change of the movement’s direction is a cause for score deduction.
The device consists in two 3.5 meters-long bars. The event consists in balance exercises, handstands and strength, the gymnast must use both bars mandatorily. Except in the final exercise in which it can be with one hand only.
It is a structure where the rings are hanging at a 2.75 meters height. The event consists in a series of strength, balance, and equilibrium exercises. It is the strength device by excellence in men’s artistic gymnastics.
The Pommel Horse is a gymnastics device used exclusively by men. Gymnasts must perform continuous circular movements around the horse with their hands, which is the only part of the body that may touch the horse. Most gymnastics beginners think that it is necessary to have extremely strong arms and shoulders to be able to practice it.

Considered the “best gymnast in Chile’s history” according to international specialists, he was the first of his country to achieve medals in the Pan American Games and World Championships. He registered the “Gonzalez” Jump in the Floor Exercises in 2003. With his participation in London 2012 Olympic Games, he became the first Chilean to participate in an Olympic gymnastics event and to qualify for an Olympic final –particularly in the events for Vault and Floor Exercise– obtaining the fourth place in both competitions. He qualified once more for the Vault finals in Rio de Janeiro 2016, finishing in seventh place. In the 2019 Pan American Games, he achieved the gold medal in the floor exercise event. In April 2017, he was chosen president of the Chilean Gymnastics Federation.

With the inspiration of his shape and his sports achievements, in 2016 a gymnastics school is created that carries his name and aims to contribute with the development of national sport. This centre has two branches, one located in Las Condes in the Iván Zamorano Sports City and the other one is located in Llanquihue, a location in the south of Chile.

Furthermore, González is a member of the sports plan Chilean Association of Olympic Athletes (ADO Chile in Spanish) and has been able to participate in the finals of the World Gymnastics Championship circuit in seventeen occasions, winning nine medals in said Championships.